"This new version of the SentiBotics robotics kit contains not only substantial improvements to existing features but additional functionality as well," said Dr. Povilas Daniusis, Neurotechnology robotics team lead. "These new capabilities not only can save time and effort for developers of mobile manipulation control systems, they also enable SentiBotics to serve as an educational platform for use at universities." 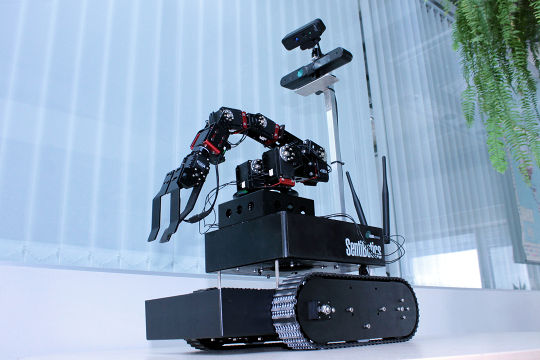 The new SentiBotics Development Kit 2.0 includes motion planning software and accurate 3D models of the robot, enabling the robot to grasp and manipulate objects while avoiding obstacles. The 3D object recognition and object grasping system also allows the robot to grasp arbitrarily-oriented objects. In addition, Neurotechnology has added the ability to use a simulation engine that enables robotics developers to work in virtual environments.

All platform components can be easily obtained from manufacturers and suppliers worldwide, so robotics developers and researchers in private industry, universities and other academic institutions can use SentiBotics as reference hardware to build their own units or to incorporate different platforms and materials.

SentiBotics and the entire line of Neurotechnology products for AI, robotics, object recognition and biometric identification are available through Neurotechnology or from distributors worldwide. For more information, go to www.neurotechnology.com.

Drawing from years of academic research in the fields of neuroinformatics, image processing and pattern recognition, Neurotechnology was founded in 1990 in Vilnius, Lithuania and released its first fingerprint identification system in 1991. Since that time the company has released more than 130 products and version upgrades for identification and verification of objects and personal identity.