BrainAccess is a kit intended for researchers and developers who need an easy-to-use and reasonably-priced EEG solution for BCI applications.

Available as BrainAccess Standard Kit and BrainAccess Extended Kit which include electroencephalographs, headwear with a set of dry-contact electrodes and software for EEG signal acquisition and processing. The kits also include ready-to-use algorithms which can be used for BCI applications.

BrainAccess EEG headwear and electroencephalographs have to be used with the BrainAccess software, and all of these are offered in BrainAccess Standard and Extended Kits.

The library enables configuration of acquisition parameters, streaming of EEG data to computer and monitoring the state of the electroencephalograph. It also features some main signal preprocessing functionality such as signal detrending, filtering and FFT calculation. Users have direct access to real-time EEG data and therefore can design their own neuroscience experiments, BCI algorithms, applications and other.

BrainAccess Core library functions can be accessed via C++ API or Python API. The library is provided as a DLL so it can be also accessed using other programming languages.

BrainAccess Viewer is an application which provides a GUI that exposes some functionality of the BrainAccess Core library. It is designed for checking signal quality, electrode fitting and recording EEG data that does not need to be time-triggered. 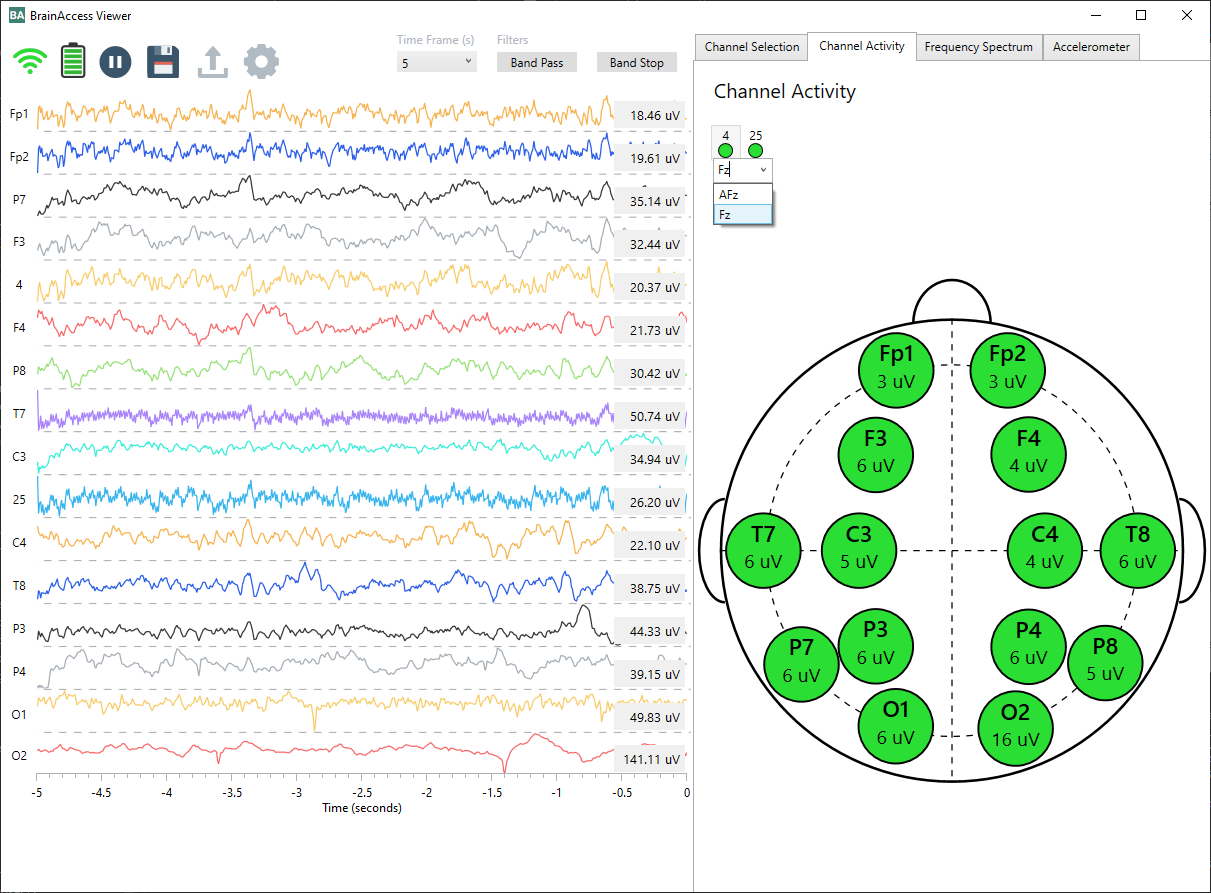 The BrainAccess BCI library is intended for researchers and developers who need to add brain-computer interface functionality into their systems. The library includes algorithms which interpret the EEG data and convert it to various commands for BCI-based applications.

There are three algorithms, based on different BCI paradigms:

The algorithms are accessible via C++ API or Python API. The library is provided as a DLL so it can be also accessed using other programming languages.

The algorithm is easy to set up and requires no callibration. It requires only two dry contact EEG electrodes placed on forehead (Fp1 and Fp2 positions).

An example of using this algorithm to control a web browser is included. A user can scroll the page up and down by moving eyes up and down respectively, can open the link in central part of the page by clenching the teeth, and can go back to the previous page by double blinking.

This classifier is based on steady-state visually-evoked potential. If a user is exposed to visual flickers of different frequencies the algorithm detects at which flicker the user has his/her visual focus. Therefore, the user can select various commands depending on which flicker he/she has concentrated on.

An example is provided where the user can select between 4 directions when contentrating on any of the 4 flickering triangles on the screen. The user has to concentrate on a particular blinking triangle corresponding to certain direction. The algorithm then makes a decision on which triangle the user has his/her visual focus by evaluating the EEG data recorded from the occipital region.

A demo is provided where a user can control a computer's sound volume based on his/her relaxation. First of all, an estimation of user's alpha frequency is made. Then the alpha brain wave power is mapped to sound volume control on the computer.