SentiBotics development kit is designed to provide a starting point for researchers and developers, who would like to focus on robot development. SentiBotics can be also used as an educational platform at universities.

The kit includes a mobile autonomous robot with a manipulator, ROS-based SDK and full source code of all algorithms used in the robot software. The robot is able to perform navigation in a common environment, recognizes 3D objects, can grasp them and manipulate with them.

The ROS-based SDK includes 3D models of the robot and a number of programming samples for the mentioned actions. SentiBotics SDK trial is available for running in Gazebo robotics simulator.

SentiBotics navigation is based on bio-inspired SLAM algorithm. The SentiBotics robot needs to explore the environment and to generate its map for navigation.

Recommendations for SLAM and autonomous navigation are:

Note, that the robot hardware is designed for in-doors use (i.e. office-like or laboratory environment).

Mapping is performed automatically by driving the robot throughout the environment using a control pad. Visual features are used to model and recognize places, and odometry data is used to track local robot's motion.

A graph-like map is continuously updated based on place recognition and odometry data, simultaneusly re-localizing the robot within the map. Each node of the map represents a particular waypoint, while edges between certain points represent the transitions between the waypoints. Once the map is constructed, it is possible to specify goal vertices in the map, and navigate to them autonomously. 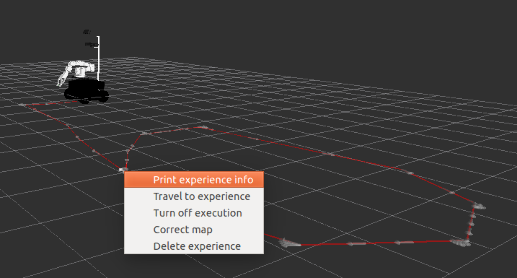 The robot navigates in the environment using a graph-based pseudometric map, which was generated during the mapping process:

Additional ROS mapping packages may be used for navigation.